This blog post was written on the night of Aug. 8th. A lot of people have noticed that the sky has been very hazy over the past couple of days (Aug. 7th and 8th). The news is blaming wildfires burning in BC (CBC news).

Can fire as far as BC affect the air in Edmonton? What is the evidence of it? As an atmospheric chemist, I’ve decided to do a little research on my own.

First of all, I did something I used to in my hometown, Beijing: a clean day vs. a polluted day! Here are pictures of North Saskatchewan river I took on Aug. 6th (top) and Aug 8th (bottom): 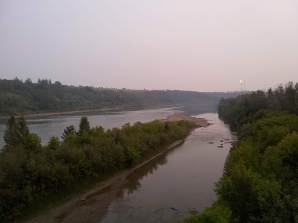 It does look pretty bad on the 8th, isn’t it? Is it bad for our health? Yes, it is Unhealthy, according to air quality index (AQI), a measure of outdoor air quality.

How does the number, 158, compare to other cities? Just for your information, the AQI values at the same time in Beijing, New Delhi, and Los Angeles were 78, 65, and 42, respectively. Of course, AQI depends on numerous factors, such as time of the day, meteorology, etc. But I’m just simply amazed that Edmonton at this moment was more polluted than all of those famous air pollution capitals in the world! By the way, AQI in Beijing on a bad day can reach 500…

Back to the Edmonton story. It is obvious from the figure above that it’s PM2.5 that’s driving the bad air quality. PM2.5 represents particulate matter smaller than 2.5 micrometer and is one of the foci of my research.  In the chart below, I refer to the real-time measurement data of PM2.5 offered by Alberta Capital Airshed. The data was taken at the Edmonton East cite, near where the polluted North Saskatchewan river picture (above) was taken. 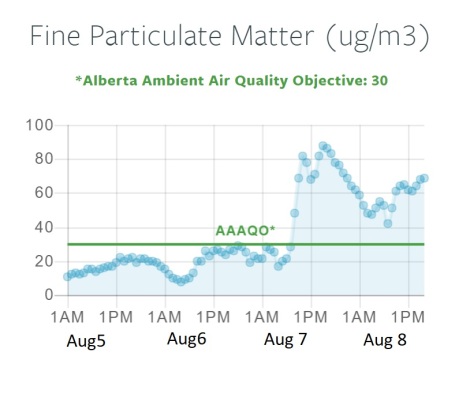 The observation is striking: PM2.5 concentration rapidly increased in the morning of Aug. 7th, to a level triple that of Alberta Ambient Air Quality Objective.

Is this sharp rise of PM2.5 really due to wildfire in BC? The best way is to look from the sky – from the Satellite!

I’ve taken the NASA satellite image for the past week, and here is a animation showing the day-by-day image of BC and Alberta. The time stamp is shown in the left-bottom corner. The red dots correspond to wildfires recorded by the satellite.

There are a few key observations from this animation. First, we can see that wildfires developed rapidly over the past couple of days, represented by the increase of the red dots. Second, the arrival of the smoke corresponded to when the PM2.5 level sharply rose in Edmonton on Aug. 7th!

Just in case it was not obvious enough in the GIF animation, here is a stationary satellite image for Aug. 8th. Wow, Edmonton is right in the center of the fire plume!

I have to say that the result of my little research was beyond my own imagination. It’s shocking how significantly the recent wildfire event is polluting the air we are breathing. Edmonton is a city normally with air cleaner than anywhere in the world.

On the global scale, biomass burning is a major source of volatile organic compounds and particulate matter to the atmosphere. Understanding the chemistry of fire emissions is a hot research direction in Atmospheric Chemistry. The Zhao group is also planning to investigate biomass burning-related environmental issues but on a different setting. We are planning to investigate the environmental impact of solid fuel burning. Stay tuned for our up-to-date results!